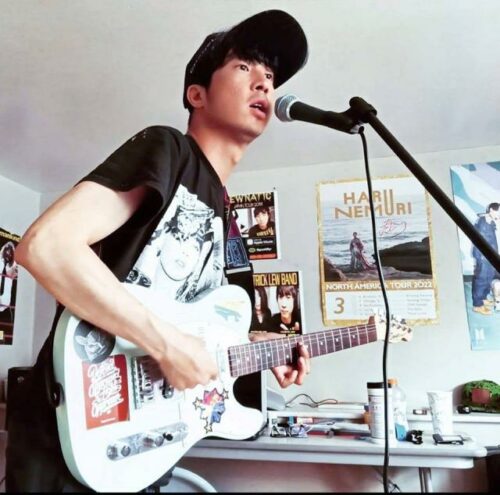 Everyone get to know Patrick Lew Hayashi, who is best known for his indie music career and his work with the Patrick Lew Band and TheVerse. He is also an online content creator, specifically, his YouTube channel.

Patrick Lew was born in San Francisco in 1985 to a Chinese father and a Japanese mother of mixed descent.

In 2001, Patrick Lew Hayashi formed a band under the banner Patrick Lew Band in his hometown of San Francisco, CA when he was just 15 years old. Most of Hayashi’s early years in the indie music circuit was playing in a garage band. In 2005, Hayashi was attending City College of San Francisco and was briefly signed to an indie label based in La Jolla, CA. After he was dropped from his developmental contract with the label, Hayashi decided to book studio time with the help of his friends.

Patrick attended Wallenberg High School in San Francisco, graduating in 2004 after being held back one grade while in elementary school. He also attended Soko Gakuen Japanese School, and graduated and got certified around the same time he graduated from high school. He later attended CSU East Bay, graduating with a B.A in Philosophy and Music Composition in 2011. He began playing guitar at the age of 13 through his older cousin Andy, whom was living with his family at the time in San Francisco.

Patrick also began using YouTube as a platform dedicated to his life as an artist/musician and in general on February 2, 2007. After several years, his YouTube channel reached a respectable amount of recognition on the Internet. As of today, there are 400+ uploaded videos on his YouTube channel.

Most of the time, Hayashi was on the Internet putting his bands music out there. On November 15, 2006, which was also Patrick Lew’s 21st birthday, the Patrick Lew Band released their debut album JUMP, RATTLE, AND ROLL on CDBaby. Patrick Lew Band would begin to sporadically play small shows in the San Francisco area by 2007 with a frequently changing line-up. Their first single AZN GIRLS was posted online during late 2007, leading to a critical backlash among the band on social-media over unbeknownst reasons. Around this same period, the bands chiptune rearranged cover of the Nirvana song Drain You was published on Nirvanaclub.com.

During 2009, Patrick Lew Band began making their strides in the regional music scene and on the Internet. Their song Everyone Loves Ashley brought them to notoriety and initial indie-level fame. Between 2009 to 2012, the band would write and record up to as many as 60 songs per year in their home studio.To have something to fall back on, Hayashi taught himself the fundamentals of the indie music business and being his own entrepreneur.

During this period, Patrick Lew Band had aborted plans to tour locally. However, the group would perform live in the Antioch area occasionally during some of 2011. Some of these performances can be found and since leaked on Patrick Lew Band’s (PLB) official YouTube channel.

On February 4, 2012, Patrick Lew Band performed at Dolores Park in San Francisco. After taking a few years away from the indies because of a failed common-law marriage and very well documented personal problems, Hayashi made his return to music with the Patrick Lew Band by the beginning of 2015. Embarking on his most profitable and memorable run in the indie music circuit.

2015 began with Hayashi being appointed the Ambassador for Antennas Direct. And conducting a televised interview with the 24 HOUR K-POP music TV channel in the San Francisco Bay Area. Around this same period, Patrick introduced a crossdressing M2F alter-ego by the name of Madeline Lew into the band. Created from digital special effects, CGI and Photoshop. In a music marketing storyline, Madelines role in the band is described as, “the long lost younger sister of Patrick Lew Hayashi saving the band from failure and bringing his band and his music back to prominence.”

The band was mostly recording in their home studio in San Francisco. By 2016, the band launched their own label and multimedia start-up Lewnatic HQ.

The band was often working on new music in their home recording studio between 2015 and early 2017. The Patrick Lew Band would release their album OAKLAND on Valentines Day 2017. He and his alter ego Madeline Lew would perform at Brick & Mortar Music Hall on October 8, 2017.

By the end of 2017, the Patrick Lew Band quietly disbanded for the second time, primarily caused by his mother’s passing earlier that year. He also began only sporadically making studio recording appearances with the band as he branched his talents to other outlets and playing music with local bands outside of Patrick Lew Band.On June 7, 2019. Patrick Lew Hayashi received the 40 Under 40 award at his alma mater CSU East Bay. He would become the first major Japanese-American male to receive the high honor.

Outside of PLB. Patrick Lew also made a brief uncredited cameo appearance on the acclaimed Amazon TV series Man in the High Castle on Season 4 and Episode 1. He also is a moderately known and prolific social-media influencer and persona, most notably on YouTube and Instagram.

In July 2019, during the second year of Patrick Lew Band’s (PLB) hiatus, Patrick began brainstorming ideas to go “back-to-basics” with his music as a solo artist. After parting ways with his previous band amicably, Patrick started Lewnatic as a personal solo recording project. And quickly began performing under the LEWNATIC banner once-a-month at DNA Lounge in San Francisco until the COVID-19 pandemic hit.

Patrick Lew Band returned to full-time status in 2020. And they reached potentially prolific status with their music and brand in the indies and on social-media with what they do. Recent years proved to be very prosperous and helped the Patrick Lew Band reach new heights. Since then, the band’s music has reached thousands of listeners in an estimated 51 different countries worldwide on Apple Music/iTunes. Subsequent reviews and press regarding PLB have been positive.

From 2020 onward since returning to pursuing their passion for making music, the Patrick Lew Band (PLB) decided to transition their project into an exclusively Internet Only type of band.

Since 2020, PLB has been featured in numerous blogs and digital music magazines online. While Lew maintains his citizenship and residence in San Francisco, the band also began gravitating their musical focus to “break into” the music scene worldwide.

2020 and 2021 also saw the band continue and sustain their momentum as a Internet-based rock band. Conducting a few Livestream concerts on social-media, and gaining new legions and generation of followers. The band also released several albums during these two years respectively on iTunes and Spotify, including their first live album IN YOUR HOUSE! Rumors began to swirl in mid-2021 regarding the Patrick Lew Band’s future online. However, the PLB released more new music going into the year 2022 online.

Lewnatic would eventually return from hiatus in early 2022, as COVID-19 pandemic began winding down considerably and quietly in the San Francisco Bay Area. He began working with his booking agents Afton Shows again. The band Lewnatic once again performed live music at DNA Lounge on February 20, 2022.

Lewnatic is intended as the spin-off band and offshoot related to the Patrick Lew Band.

The band’s live setup and tech rider is based on minimalism and convenience when traveling with Patrick’s guitar rig. Instead of bringing his 50 watt Marshall amp and lots of gear in an Uber ride to venues he’s booked to perform for the evening, most of Lewnatic’s live gear is based off a virtual guitar amp and backing tracks on Patrick’s laptop. Alongside, an inexpensive audio DI box and Fender Telecaster.

As a live musical act, the band Lewnatic performs a mix of PLB and Lewnatic material. The musical arrangements vary and are different for every performance every night! All the musical performances are improvised, spontaneous, and completely rearranged. Differentiating itself from the original studio recordings.

During the end of March 2022, Lewnatic began recording their second album Strictly Prohibited at their home studio in San Francisco. On one of the new upcoming tracks “As Gritty As I Want To Be,” Patrick’s relative Madeline Lew makes a guest appearance as a lead singer. The music creation for the entire album was finished in less than a week reportedly, and was released worldwide in April 2022 on Spotify, Apple Music and everywhere else.

During this same period, Patrick Lew Hayashi also started an Only Fans account to allow fans to have more intimate and personal access with Patrick himself, alongside, Madeline Lew from the Patrick Lew Band.

On July 19, 2022, Lewnatic signed a 1-year record contract with Bentley Records. LEWNATIC released their first album under a record label (and their third LP) titled Rapid Fire worldwide tentatively on August 19, 2022! Featuring six all-new guitar-based instrumental rock compositions with a strong CITY POP and Anime-like theme. The album was hyped and promoted by both Bentley Records and Patrick Lew himself on social-media.

Despite placing most of his focus and energy onto his Lewnatic project, Patrick Lew remains sporadically active with the Patrick Lew Band as well.

On August 28, 2022, Lewnatic live-streamed their most recent performance directly through Patrick Lew Hayashi’s YouTube channel, performing two rearranged songs off Patrick Lew Band’s 2022 EP Pariah Vol. 2 (“Are You Down With Me?” and “Love Yourself”). Another virtual concert on his YouTube channel commenced a month later, where Lewnatic live-streamed a cover of the Elvis Presley song That’s All Right Mama.

Most of my Lewnatic’s virtual concerts are pre-recorded on Patrick’s 2017/18 iPad. And edited on iMovie on his old laptop before being posted online. The band’s colleague and friend James Conrad also handles videography and photography for the solo project locally in San Francisco.

Lewnatic also announced plans to perform regionally through their booking agents Afton Shows in the future potentially on occasion. Meanwhile, Patrick Lew remains sporadically active with the Patrick Lew Band (PLB) as an Internet-only type of rock band as well!

The main focus going into 2023 however, is primarily going to be making new music and perhaps playing more live shows with the LEWNATIC project. Please stick around, and stay tuned for more developments in the exciting rock and roll world from the prolific half-Chinese, half-Japanese maestro known to the world as Patrick Lew Hayashi, and all his affiliated bands!