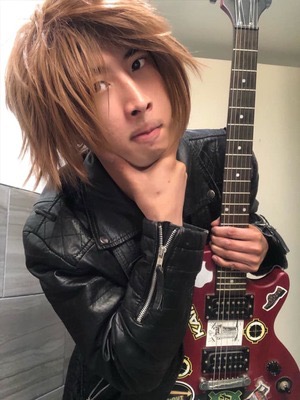 LEWNATIC415 is a heavy punk rock band that was created by Patrick Lew Hayashi, who is best known for his indie music career and his work with the Patrick Lew Band and TheVerse. He is also an online content creator, specificially, his YouTube channel.

Born to a Chinese father and Japanese mother of mixed descent, Patrick began playing guitar at age 13 when his cousin Andy was living with his family while studying at a community college as an International Student. He began his indie music career in 2001, playing guitar and singing in his high school band, which later would evolve into the Patrick Lew Band. Patrick is also a moderately known influencer, having been making YouTube videos online since 2007 at age 21.

In July 2019, during the second year of Patrick Lew Band’s (PLB) hiatus, Patrick began brainstorming ideas to go “back-to-basics” with his music as a solo artist. After parting ways with his previous band amicably, Patrick started Lewnatic as a personal solo recording project. And quickly began performing under the LEWNATIC banner once-a-month at DNA Lounge in San Francisco until the COVID-19 pandemic hit.

The band’s name Lewnatic is a spoonerism of Patrick’s father’s surname and “Lunatic.”

For the next two years, Patrick returned to performing, recording and live-streaming webcasts with the Bay Area band that made him sort of famous globally with his cousin Madeline Lew, the Patrick Lew Band. Embarking on their most prolific stage as artists. By this point, the Patrick Lew Band began receiving recognition and exposure worldwide and online. As bloggers and curators began writing about PLB more positively and they began putting Patrick Lew Band’s music more out there to the public.

Lewnatic would eventually return from hiatus in early 2022, as COVID-19 pandemic began winding down considerably and quietly in the San Francisco Bay Area. He began working with his booking agents Afton Shows again. The band Lewnatic once again performed live music at DNA Lounge on February 20, 2022.

Lewnatic is intended as the spin-off band and offshoot related to the Patrick Lew Band. Alongside, a touring and live-stream concert experiment as a solo artist. Whereas, with PLB, due to sophisticated nature (Madeline’s reluctance) and other complicated myriad of reasons backstage, cannot tour or perform live.

The band’s live setup and tech rider is based on minimalism and convenience when traveling with Patrick’s guitar rig. Instead of bringing his 50 watt Marshall amp and lots of gear in an Uber ride to venues he’s booked to perform for the evening, most of Lewnatic’s live gear is based off a virtual guitar amp and backing tracks on Patrick’s laptop. Alongside, an inexpensive audio DI box and Fender Telecaster.

As a live musical act, the band Lewnatic performs a mix of PLB and spontaenously performed solo heavy rock inspired material that Patrick created mostly without Madeline and Madoku involved from the Patrick Lew Band. The musical arrangements vary and are different for every performance every night! All the musical performances are improvised, spontaneous, and completely rearranged. Differentiating itself from the original studio recordings.

During the end of March 2022, Lewnatic began recording their second album Strictly Prohibited at their home studio in San Francisco. On one of the new upcoming tracks “As Gritty As I Want To Be,” Patrick’s relative Madeline Lew makes a guest appearance as a lead singer. The music creation for the entire album was finished in less than a week reportedly, and was released worldwide in April 2022 on Spotify, Apple Music and everywhere else.

During this same period, Patrick Lew Hayashi also started an Only Fans account to allow fans to have more intimate and personal access with Patrick himself, alongside, Madeline Lew from the Patrick Lew Band.

On July 19, 2022, Lewnatic signed a 1-year record contract with Bentley Records. LEWNATIC released their first album under a record label (and their third LP) titled Rapid Fire worldwide tentatively on August 19, 2022! Featuring six all-new guitar-based instrumental rock compositions with a strong CITY POP and Anime-like theme. The album was briefly promoted by both Bentley Records and Patrick Lew himself on social-media.

Despite placing most of his focus and energy onto his Lewnatic project, Patrick Lew remains sporadically active with the Patrick Lew Band as well.

On August 28, 2022, Lewnatic live-streamed their most recent performance directly through Patrick Lew Hayashi’s YouTube channel, performing two rearranged songs off Patrick Lew Band’s 2022 EP Pariah Vol. 2 (“Are You Down With Me” and “Love Yourself”). Another virtual concert on his YouTube channel commenced a month later, where Lewnatic live-streamed a cover of the Elvis Presley song That’s All Right Mama.

Most of my Lewnatic’s virtual concerts are pre-recorded on Patrick’s 2017/18 iPad or his iPhone 13 PRO. And edited on iMovie on his old laptop before being posted online. The band’s colleague and friend James Conrad also handles videography and photography for the solo project locally in San Francisco.

On September 24, 2022, Lewnatic filmed an MV for their first single off their album Rapid Fire in San Francisco’s Chinatown. The music video world premiered in mid-October, and amassed a decent number of views on YouTube. The MV for their single We The People served as a #StopAsianHate and #BLM anthem during the post-pandemic aftermath affecting minorities in the United States. Two more live-stream performances followed at PLB HQ (Patrick Lew’s personal rehearsal space) in San Francisco that month also.

In November 2022, it was revealed that Lewnatic and the band’s videographer James Conrad are planning a virtual concert film at a remotely anonymous location in the East Bay, California. The concept is similar to Pink Floyd’s 1972 concert at Pompeii. The concert film is tentatively scheduled to be filmed on-location in front of no live audience by mid-2023. Currently, Patrick Lew (on behalf of Lewnatic), James Conrad, and two audio engineers enlisted for the project are petitioning a GoFundMe campaign by Christmas 2022 to raise funds to finance and budget the concert film.

Lewnatic also announced plans to perform regionally through their booking agents Afton Shows in the future potentially on occasion.

The main motives for doing the band Lewnatic is to have fun, play heavy music and not take life and music in general so seriously. And the occasional punk rock show, whether it be a webcast or at the local dive bar! Expect more from the Sino-Japanese rock and roll pariah and icon himself. The Lewnatic is coming to town!