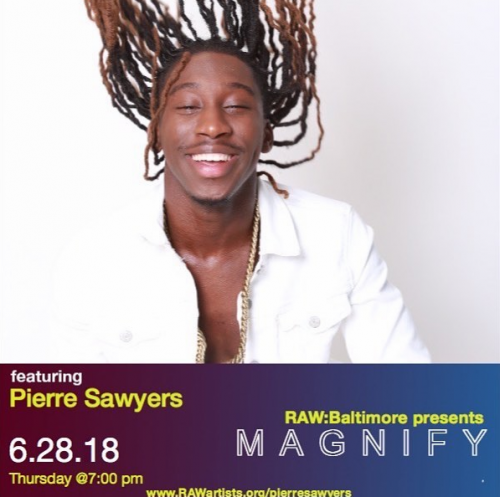 Pierre Sawyers has been getting ready to push his career to the next level!
Baltimore, MD (April 27, 2018) — Pop/R&B sensation, Pierre Sawyers, takes center stage at the
Raw Artist show in Baltimore, MD June 28th at the Baltimore Soundstage for the start of the minitour.
It was recently published on his updated website www.offficialpierresawyers.com and has
been promoted on social media. Pierre
Sawyers will be performing some of his biggest
hit songs such as Summa Time Again, Show
You Off, and much more. You can purchase
tickets at www.rawartists.org/pierresawyers.
Pierre Sawyers has been heavily working on
new music and collaborations with some of
Baltimore’s hit artists such as Jay Verze, Remy,
and Major. He is currently in production of
working on his next EP a collaboration album
between himself and artist Major. So watch out
Chris Brown and Tyga there is a new duo on
the block. Their album will be a mixture of
Pop, R&B, and hip-hop songs. So be on the
heavy look out for the release date because it’s
going to be a banger!
New music video teaser has been spoken from
Sawyers social media sites on single Show You
Off. The music video is set to be released
sometime late May/early June of this year. The
music video will be taken place in Baltimore,
MD. The video is set to be directed by Sean Morant of Morant Sean LLC, who has creative directed
his previous video from 2016; Summa Time Again.
“I am so excited for the new music and the tour, I can not wait to share with you guys my tap into
new sounds and vibes I have experienced throughout my life… This project will be my biggest yet
so stay tuned…” – Pierre Sawyers
About Pierre Sawyers:
While perhaps best known as one of the lead singers from hip-hop group GBS, Baltimore artist
Pierre Sawyers continues to build momentum as a solo performer gaining respect in the music
community as a singer and artist.
His music promotes fun, laughter, passion, and joy for every and all ages. He has been published
in Indie Soul Magazine in Feb 2017 for his single Summa Time Again and has performed at
numerous venues in Baltimore City. His pop songs will get you up and shaking with its eccentric
mix rocking pop beats. His R&B songs will slip you into a melodic trance making you feel
adoration and affection for the one you love.